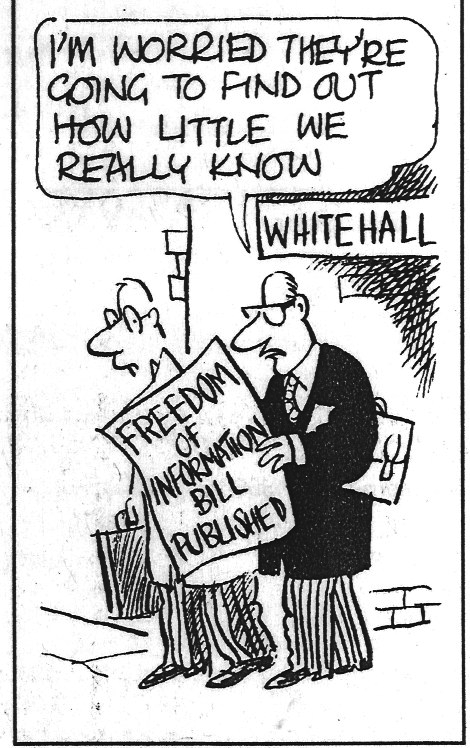 Civil servants working on the development of particular policies are not directly accountable to the public.   We are accountable to Ministers who are in turn accountable to Parliament.  But the public are our ultimate paymasters and (despite the message in this cartoon) we should be open with them, unless there is a very good reason not to be. After all, we deal with complex issues and have no monopoly of wisdom or knowledge. It therefore makes sense to explain the way in which the Government’s policies are developing, before they are set in concrete, so that we can be told if we are getting anything wrong, and in particular if our assumptions are incorrect. We should also explain the way in which we administer our schemes and make decisions, and we should make available the internal guidance and rules which govern our procedures.

Ministers and officials have always argued that there should be two important constraints on transparency. First, we have respected the needs of those who have provided us with information in confidence, or with commercially sensitive information. We should not disclose such information without the permission of the person who provided it.

Second, we have not disclosed our advice to Ministers, for this weakens their position if they decide that they will not accept our advice. Open Government in this area would thus tend to increase the power of officials as compared with Ministers, and this is hardly in the interests of democracy. Similarly, there is a strict prohibition against revealing that the Law Officers have been consulted, let alone what they have advised.

The Supreme Court has summarised the competing pressures in this way:

Information is the key to sound decision-making, to accountability and development; it underpins democracy and assists in combatting poverty, oppression, corruption, prejudice and inefficiency. Administrators, judges, arbitrators, and persons conducting inquiries and investigations depend upon it; likewise the press, NGOs and individuals concerned to report on issues of public interest. Unwillingness to disclose information may arise through habits of secrecy or reasons of self-protection. But information can be genuinely private, confidential or sensitive, and these interests merit respect in their own right and, in the case of those who depend on information to fulfil their functions, because this may not otherwise be forthcoming. These competing considerations, and the balance between them, lie behind the issues on this appeal.

Before the Freedom of Information Act came into force, if I was not been sure whether to provide information, I asked myself whether we would provide it in response to a Parliamentary Question. If we would, then we should be prepared to give it without such a stimulus. But if we would refuse information to an MP, we should prima facie refuse to give it to the public.  I rather doubt that the FoI Act has in practice moved the borderline between what information should and should not be disclosed, although it has certainly strengthened the public’s hand against Ministers and officials who might been tempted to be unduly secretive.

Such qualified exemptions include:

Appeals against officials’ decisions can be made to the Information Commissioner who seems to be taking a pretty sensible line. One interesting decision was made in April 2007 when he forced the publication of advice to (then Chancellor) Gordon Brown on the likely consequences of changing the taxation of pension funds.  The Commissioner recognised the “chilling effect” associated with the publication of civil service advice, but also recognised that this effect should decline over time and thought that, as the advice had been given 10 years earlier, the balance had swung in favour of disclosure.  There were  clearly going to be plenty more appeals in this area, but it did begin to look as though the Commissioner would generally protect the confidentiality of officials’ advice for some years, but there would need to be good reasons if he is to be persuaded that this period should exceed 10 years.

More generally, however, if your default approach is to be open, and to respond positively to informal requests, then you will seldom if ever find yourself corresponding with the Information Commissioner. But if it begins to look as though you might be getting into a dispute in this area then make sure that you read the Act and the guidance material very carefully, and also consult experienced colleagues, including your department’s Freedom of Information officer.  There is also some very helpful advice on the website of the Information Commissioner.   But do bear in mind that, if you assert the need for confidentiality and are overruled, the public are more likely to see conspiracy than cock up.

The need for transparency is even stronger if we are working on inquiries that have a judicial character.   Click here for more information in this area.