This chart shows the number of SpAds through to 2014.

(The numbers are snapshots at particular dates. I am not aware of any similar stats for before 1994, or for 2009, although the Yong/Hazell book summarises the numbers employed at any one time in those years, a slightly higher figure.) 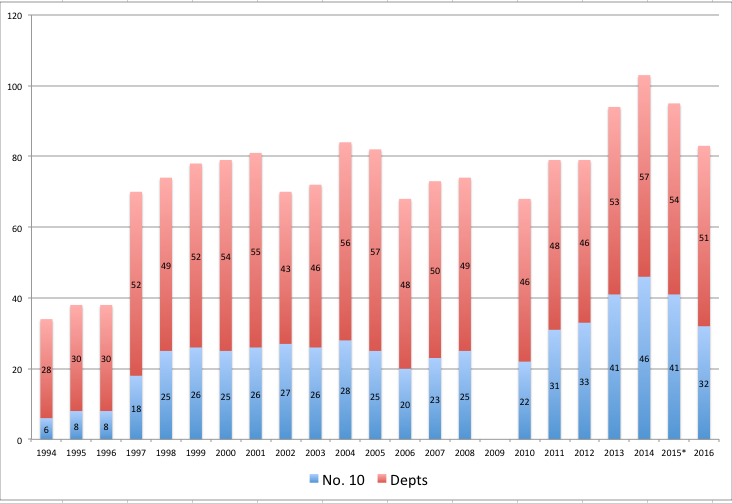 *(The 2015 split between No.10 and other departments is estimated. But the total is correct.)

Note in particular the sharp increase in the post-1997 Blair Government years, not only in the Prime Minister’s Office (No.10) but also elsewhere in government, most particularly in Chancellor Gordon Brown’s Council of Economic Advisers. This council included Ed Miliband and was informally Chaired by Ed Balls, another Special Adviser with the title of Chief Economic Adviser

Note also that the number increased again during the post 2010 coalition government, though this was mainly because the LibDems had their own set of SpAds, especially in No.10.

The Johnson Government employed a record 114 Spads as of late 2020, of which 51 worked for the Prime Minister and 7 worked jointly for the PM and the Chancellor.