This page was last updated in June 2022.   Please follow @ukcivilservant on Twitter for notifications of new and amended material.

The UK workforce currently totals around 32.7 million, of which …

The following two charts summarise the above data. 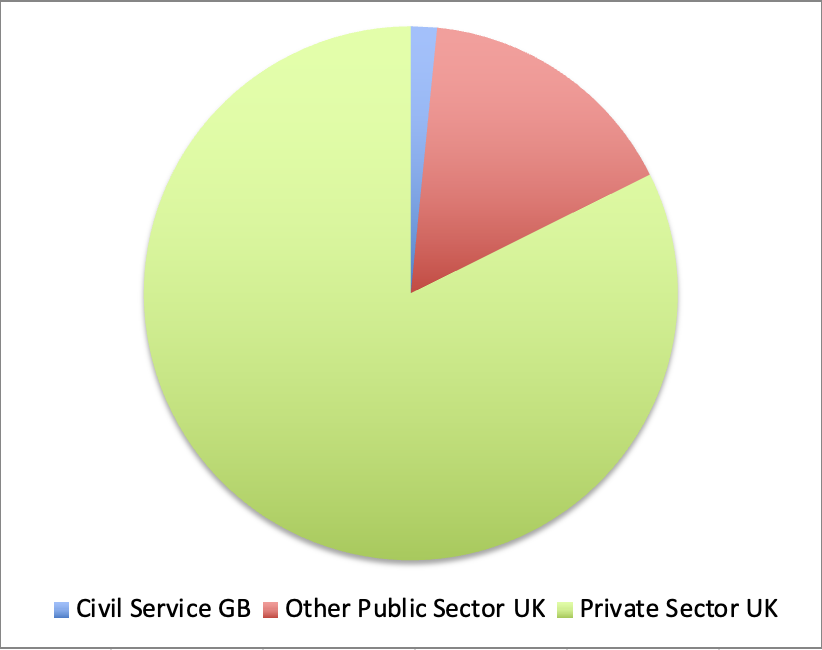 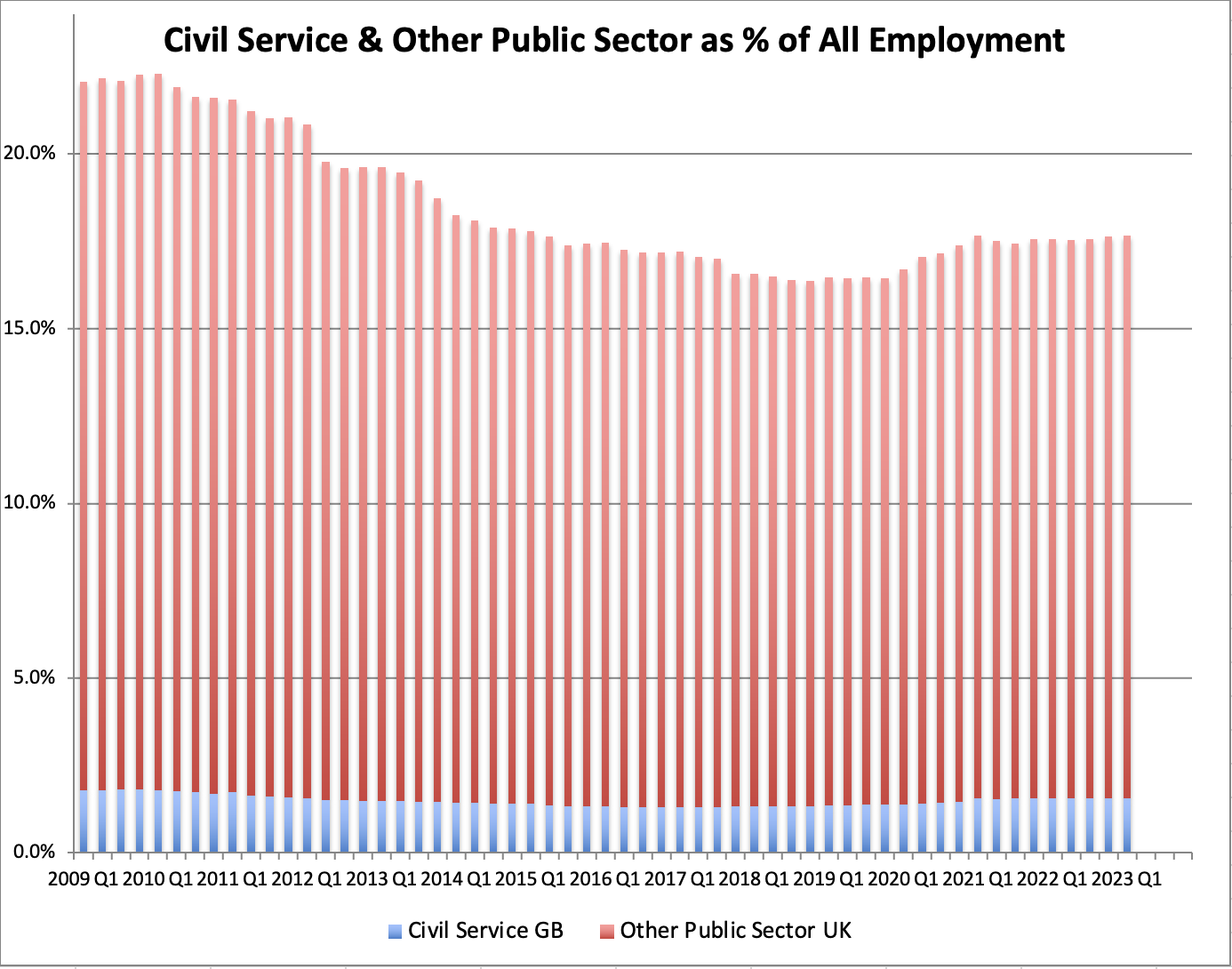 Note:   The figures in the first para above, and the above charts, are 'headcount', i.e. part-timers count as 1 each.  (This is because full time equivalent figures are not available for the private sector.)

The next charts track various measures of the number of full time equivalent (fte) civil servants.  There were around 475,000 fte civil servants in post in December 2021, including casual/temporary staff but excluding security personnel (see Note 3 below). 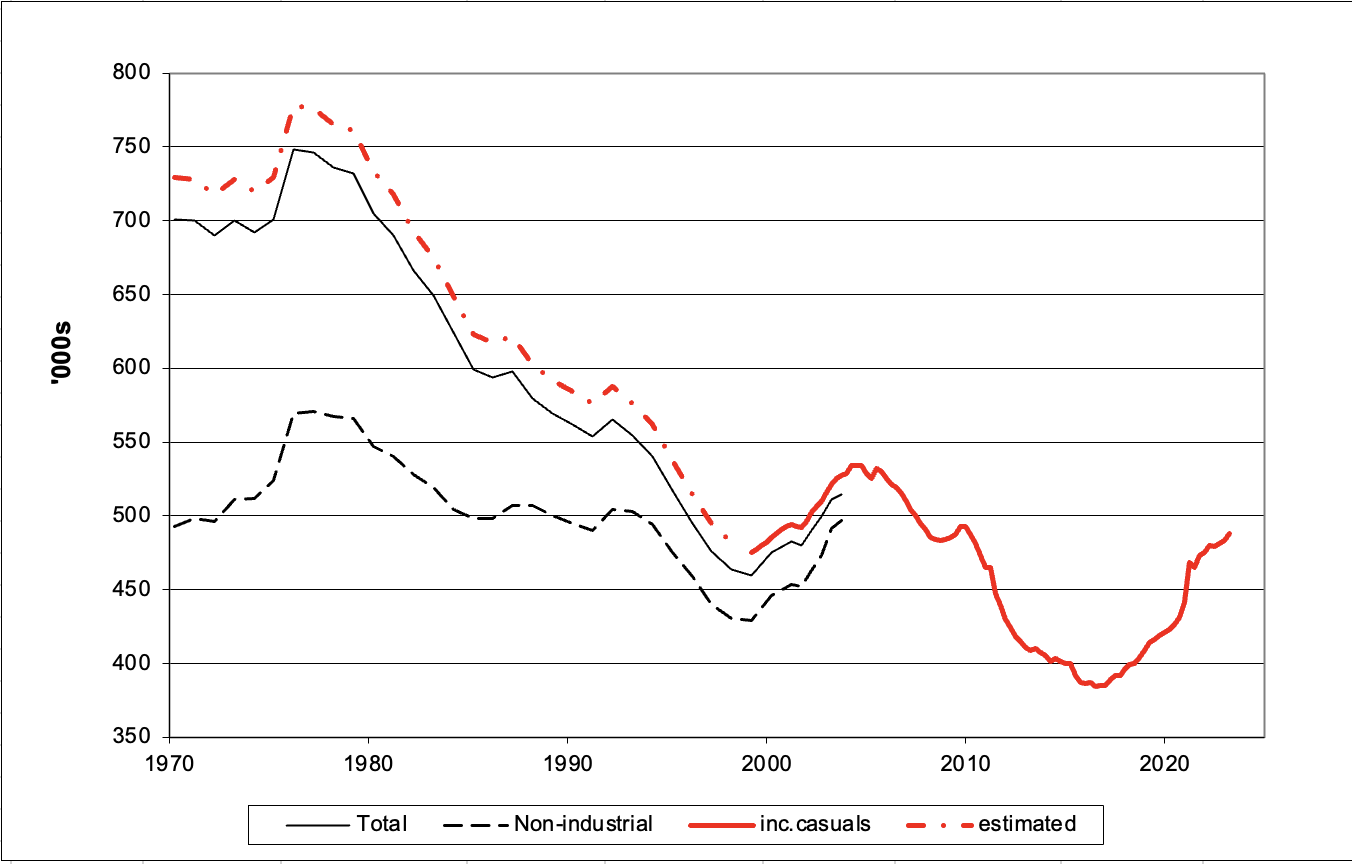 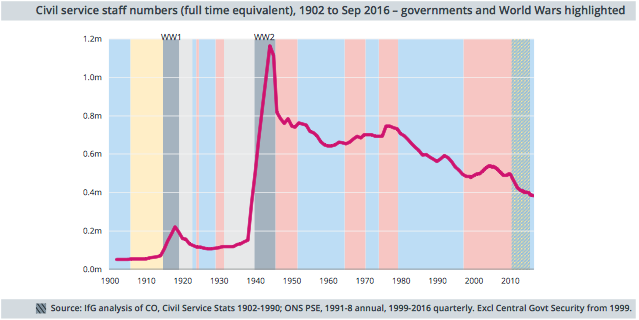 The number of blue collar (industrial) civil servants then began to fall, aided by privatisation, reclassification and contracting out, so that there were only 18,200 in post as at October 2003.

Post 1979 Conservative Government: The number of white collar (non-industrial) civil servants has not fallen in anything like the same way.  Indeed, it hit a maximum of 571,000 (excluding casuals) in 1977, before Mrs Thatcher's government was elected in 1979.  It then fell to a low of 475,000 (now including casuals) in Q1 1999, about 18 months after the election of Tony Blair's New Labour government.

New Labour Government to 2010: CS numbers then started to rise again, plateauing at around 534,000 in 2004 before Chancellor of the Exchequer Gordon Brown announced in July 2004 that he intended to cut c.84,000 posts, whilst creating a number of new posts in the front line so that the net reduction would be c.70,000.  Civil service numbers were subsequently increased by the transfer of 11,000 fte magistrates court staff from local authority control to the new central government courts service.  The then Chancellor’s (and in due course Prime Minister’s) target therefore became around 475,000.  In the event, the target was nearly reached as numbers had fallen to 484,000 before the deadline of the end of 2008, and there were only around 481,000 fte civil servants by the time of the 2010 General Election.

It is interesting to note that these reductions were not always mirrored by changes in the number of Senior Civil Servants (SCS).  Click here for further detail.

The Chancellor's 2015 Autumn Statement foreshadowed further significant but unquantified reductions in the sizes of the main Whitehall departments. The fte total had fallen to 384,000 by June 2016 but then began to rise quite quickly, reaching 475,000 by December 2021, mainly reflecting recruitment following the June 2016 Brexit referendum.  Part of the increase from mid-2020 will have been attributable to needing more staff devoted to Covid related work such as paying benefits.  There was a small drop in Q2 2021 caused by temporary census staff no longer appearing in the statistics.  The upward trend continued in Q3 2021.

Brexit preparation clearly required the recruitment of well over 50,000 officials - rather more than the number employed by 'Brussels' to carry out all centralised EU functions.  Assuming a cost/head of £40k to include salaries, accommodation, employers' pension contributions & NIC, etc., Brexit preparation cost at least £2 billion pa in staff costs alone.

Numbers spiked again from mid-2020 and there are currently around 90,000 more officials than in mid-2016. Some of this further 40,000 increase will have been due to the Covid pandemic and some will have because of further Brexit preparations.

Chancellor Rishi Sunak announced in his 2021 Budget that the government planned to reduce "non-frontline" civil service headcount to 2019-20 (that is pre-pandemic) levels as part of plans to reinvest 5% of departmental budgets into “priority areas” by 2024-25,  As so often with that government, there was little indication that the detail had been thought through, including the definitions of 'frontline' and 'non-frontline'.  But ministers let it be known that they expected civil service headcount to fall by 25,000 so that the fte total would fall from 473,000 in 2021 Q3 to 448,000.

In an interview with The Times in early 2022, Jacob Rees-Mogg, the new Minister for Brexit Opportunities and Government Reform, said that 'at least 65,000 posts must be cut' to bring the civil service 'below 425,000' so as to ensure that Brexit had led to a significant reduction of jobs.  According to The Times, he also said that "he would personally review every new vacant post to see if it could be closed down".  His ministerial colleague Steve Barclay told MPs that “This is also about empowering civil servants and taking away often the many layers so that the very good work of sometimes more junior civil servants can get to ministers and senior decision makers”.

Then, in May 2022,  the government announced that it intended to reduce the civil service to its pre-Brexit referendum size of 384k fte by mid 2025 - despite the fact that Brexit had repatriated a significant number of regulatory etc. responsibilities from 'Brussels', and required additional border control staff.  The resultant number would be 91k lower than the (then latest reported) 2021 Q4 figure of 475k.

Comment:- Asked on the Today programme what the government wanted to do less of,  Jacob Rees-Mogg said:  “We are actually going back to the level that we had at 2016. So it’s not a question of doing less of, it’s doing things more efficiently.” Cabinet Secretary Simon Case took a very different line in front of a Parliamentary committee, identifying three types of saving.  There would be a contribution from efficiency, but this had its limits, especially as he ruled out significant reductions in quality of service.  There would also be a contribution from transformation.  (Commentators noted that such savings were somewhat speculative and (once identified) would be slow to materialise. )  Much therefore would depend on Minister-chosen prioritisation.

1. Changes in civil service numbers do not necessarily translate into parallel increases/decreases in public expenditure, nor in the size of the state.  This is because reductions in the size of the civil service can be the result of out-sourcing to the private sector, whilst reductions in the number of quangos etc. can lead to their functions, and their staff, ending up in central government, and so increasing civil service numbers.  A significant reduction in numbers between Q1 and Q2 2015, for instance, was assisted by the transfer of c.7000 staff to the private sector or to newly-created government-owned companies such the Highways England and the Ordnance Survey (although some of the 7,000 had previously joined the civil service in 2014 when the Probation Service was subsumed within the National Offender Management Service within the Ministry of Justice).

2. Reclassifications of the status of employers can also make significant differences to the statistics. Here are the main changes to the definition of public sector in recent years, though none affected the definition and size of the civil service:

3. The IfG published this interesting chart in 2018. The post-2010 reduction in civil service numbers was clearly proportionately greater at the lower end of the pay range. 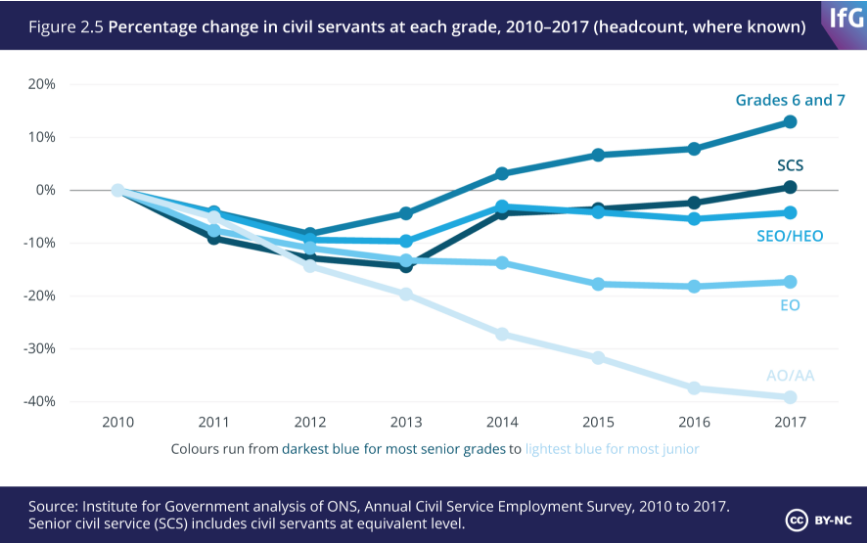 4.  For operational security reasons, Central Government Security Workforce numbers were omitted from civil service statistics published after the summer of 2016, and there were consequential revisions to public and private sector employment estimates back to March 1999. These revisions have been carried through into the above text and charts (with the exception of the two black lines in the third chart).

5.  Other Civil Service statistics may be found here.

6.  Michael Coolican has written an excellent history of the civil service from the Normans through to 2018, including quite a bit about civil service numbers.  His book is called  No Tradesmen and No Women.