Although there are only around 4,000 of them (around 0.8% of the total), a good deal of attention is paid each year to the salaries of the SCS. This is because

By way of background, it is well worth reading the 2021 IfG report Pay Reform for the Senior Civil Service.  Commenting on the report, the IfG's Alex Thomas noted that:

'A decade of wage restraint means that median civil service salaries have fallen in real terms by 14-17% since 2009. A civil service director’s base pay is half that of their equivalent in the private sector.  While generous civil service pensions bridge around half the gap, the government has recognised that the current system requires reform. ...

However, reforming pay is unlikely to do much on its own to reduce job churn within the civil service. Our interviews with private sector experts, professional bodies and civil servants themselves found that changing the criteria for promotion, and more focus from ministers and top officials on keeping people in post, will make a bigger difference.

Senior civil servants are motivated by the work they do, their seniority and their status more than by pay. So changing how civil servants are promoted and the skills that ministers and permanent secretaries value is a more important step towards reducing excessive turnover than tweaking how much government officials are paid.'

Comparison with the Private Sector

Equivalent private sector salaries are much higher. Most obviously, more than 2,800 people in the City of London were paid more than £1m in 2009, according to the Financial Services Authority. But the detail is also very telling.

These comparisons were typically much worse (for the SCS) than they had been four years earlier, which strongly suggest that higher paid private sector employees had managed to insulate themselves from the pressures that caused reductions in the real remuneration of most of their staff as well as the whole of the public sector. The SCS, in contrast, suffered badly from the combined effect of pay freezes, increases in pension contributions, reductions in bonuses etc. The SSRB reported in 2015 that "most of our remit group members have experienced a fall of between a fifth and a quarter in their real terms take-home earnings between 2009-10 and 2014-15". Then, in 2016, the SSRB reported that 'public sector pay, for full-time employees, at the 98th percentile in 2015 was approximately 18% lower than in the private sector, at around £90,000 compared to £110,000'. Further detail is in annual SSRB reports.

Comparison with the Rest of the Public Sector

Others in the public sector - subject to less political and media pressure - are often paid much more.

Indeed, public sector media pay can be astonishingly high, presumably because this is less likely to be criticised by colleagues elsewhere in the media. Channel 4 TV, for instance, paid its Chief Executive £957k in 2016.

(The Cabinet Secretary/Head of the Civil Service earned around £200k in 2019.)

The government publishes every year a list of the highest public sector salaries for which it has some responsibility. This spreadsheet, for example, was published in 2020.  For comparison, the 2017 version is here.

My What is a Civil Servant? web page will help you understand the difference between the civil service and the rest of the public sector.

The same Hay report notes that, although SCS staff turnover remained low at around 10%, it was on a rising trend. Also, recent SSRB reports confirm that only 20-30% of SCS leavers do so on retirement. The others resign or come to the end of fixed term contracts or are encouraged to leave with the help of early retirement packages. Just as in the higher levels of the private sector, there is a high attrition rate at age 50 and above. Click here for more detail.

Finally, successive SSRB reports have expressed increasing concern about the dual market in SCS recruitment, as around half of all SCS appointments have in recent years been made from outside the SCS itself, and very often at significantly higher salaries. One SSRB report a few years ago noted that internal recruits to Pay Band 2 were appointed at salaries which averaged £92,000, whilst the equivalent figure for external candidates was £102,500. See the latest SSRB reports for further detail, comment and analysis.  This 2022 job advertisement was unusual only in its honesty about the dual market:- 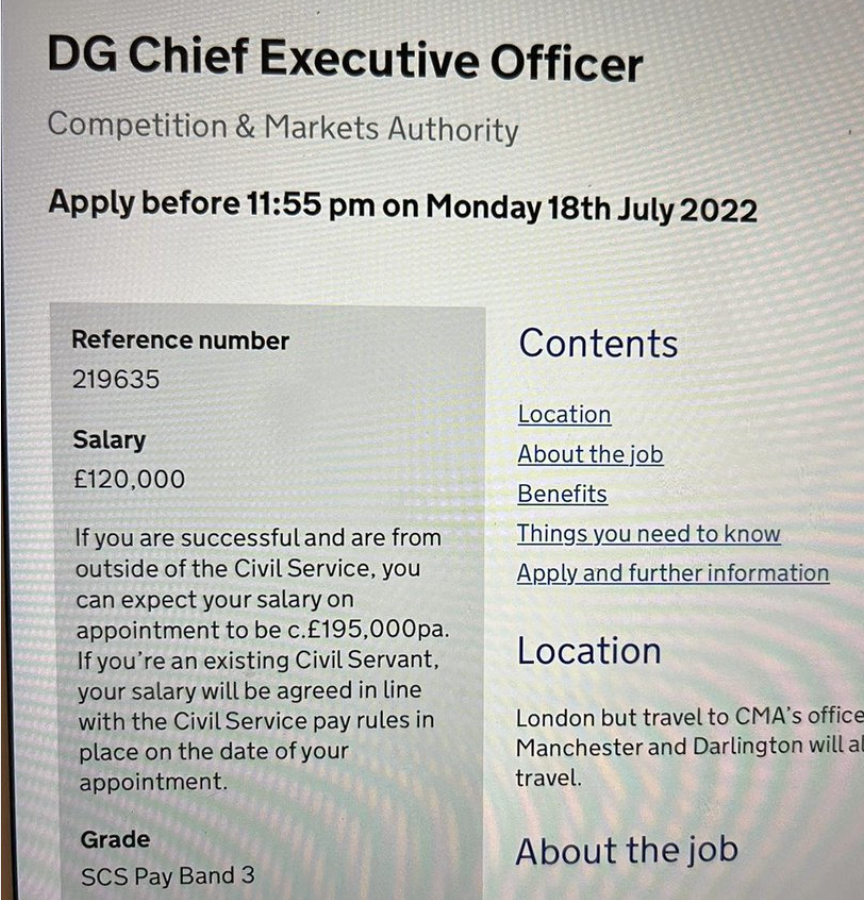 [Follow this link for information about the remuneration of the wider civil service.]