What is a Civil Servant?

(The media and journalists are often referred to as the Fourth Estate. This is by reference to the three historic Estates:- the nobility, the clergy and 'The Third Estate'  -  everyone else.  Bishops and some hereditary nobility even now continue to sit in the House of Lords, The UK Parliament's second chamber.)

Civil servants are those who are employed by 'the Crown'.

The “Crown” fulfils the same role at the national level that the “State” fulfils on the international plane. The Executive (the government of the day) represents the Crown/State. The Crown and State endure; governments come and go.  'The Crown', for this purpose at least, does not include Her Majesty herself - so those employed by the Monarch are not civil servants.

Parliament is quite separate from the Crown so those who are employed by Parliament are also not civil servants.

And those employed by other public bodies -such as local authorities, the NHS, the police service and the BBC - are also not civil servants. Indeed, only 1 in 12 UK public servants are classed as civil servants.

This note accordingly looks in some detail at the various types of public body and considers whether they employ civil servants. As you will see from the following notes, there are many different types of public body. It is easy to see why some fall into one category or another, but others could easily have been created, and so categorised, in a different way, and their status owes more to historical accident than clever design. Those interested in more detail should read the excellent House of Commons Library "Public Bodies" Briefing Paper.

Follow this link for an analysis of the numbers of civil servants both over time and as a proportion of the wider public service.

See Note 2 below for some information about the Crown's prerogative power.

Those Employed by Parliament

This first category of public body is comprised of Parliament itself, and the bodies which report direct to Parliament, including the National Audit Office, the Parliamentary Ombudsman and the Electoral Commission. Constitutionally, employees of these bodies are not servants of the Crown and they are therefore not civil servants.

The second category of public body is comprised mainly of those who work for Government departments which report to Ministers (who are of course always Parliamentarians).

This website is written for and about those civil servants who work in such departments. A list of Ministerial Government Departments may be found on the Cabinet Office website, and a list (as at 2014) is at the end of this note.

As civil servants are employed by the Crown, and not by individual departments, they can be transferred between departments without formality and without losing employment rights. This not only facilitates the free flow of staff between departments, but also greatly facilitates reorganisations within central government. Indeed it is quite common for large numbers of civil servants to find themselves working for an entirely different department at only a few hours notice.

Special Advisers are political appointees who are employed by Ministerial government departments on special terms. They are, however, still civil servants. (Follow this link for more information about Special Advisers.)

Many Ministerial departments have turned parts of themselves into ...

There are around 45 of these bodies (such as HM Passport Office, the Met Office, DVLA, Public Health England, and Companies House) which constitutionally remain an integral part of their parent department. However, they generally implement established policies so it makes sense for them to be run semi-independently from their department's head offices. Most MPs who wish to raise constituency matters with such Agencies are content to correspond directly with their Chief Executives, rather than through Ministerial intermediaries.

But problems can arise when an agency uses (what it regards as) its management freedom in a way which Ministers believe impacts on established polices, especially in highly political areas such as those within the responsibility of the Home Office. The Prison Service was accordingly made into an Executive Agency, but then the decision was reversed when the performance of the Service was subsequently criticised. And then there were problems at the Border Agency when the Agency's managers sought simultaneously (a) to manage the scrutiny of ever-increasing numbers of travelers and (b) to cut staff by relaxing border controls in ways which were not approved my Ministers. John Vine, the Agency's Independent Chief Inspector, reported in February 2012 report and said that:-

"Overall, I found poor communication, poor managerial oversight and a lack of clarity about roles and responsibilities. There was no single framework setting out all potential border security checks, which of these could be suspended, in what circumstances and the level of authority required at Agency or Ministerial level to do so. There is a fundamental question of how free the Agency should be to decide its own operational priorities. These are important issues that need to be considered in order to define and agree the boundaries between the Home Office and the Agency." (emphasis added)

This agency, too, was subsequently abolished.

More information about the history of Executive Agencies (also known as Next Steps Agencies) may be found here.

Some civil servants do not report to Ministers but work for a number of non-Ministerial Government Departments (NMGDs), whose detailed status varies considerably from one to another:-

Non-Ministerial Government Departments are listed below and on the Cabinet Office website. Follow this link for more information about regulators and regulation.

A large number of civil servants also work in the Devolved Administrations in Scotland, Wales and Northern Ireland. Note, however, that UK civil service statistics generally exclude those working for the Diplomatic Service and the Northern Ireland Civil Service.

Employees of the Health and Safety Executive (HSE) and the Advisory, Conciliation and Arbitration Commission (ACAS) are also currently classified as civil servants even though these two bodies are in fact large NDPBs (see below for a definition of NDPB).

There are a wide variety of other public bodies which do not generally employ civil servants (other than on loan from government departments). (The only exceptions (as noted above) are the HSE and ACAS which have not been classified as Government departments but whose employees are nevertheless regarded as civil servants.) The main categories are:-

Notes:- The first three in the above list, together with the Civil Service and those reporting to Parliament and the Monarch, are generally referred to as "Central Government".

There are around 400 NDPBs (Non-departmental public bodies, more popularly known as "quangos":- Quasi Autonomous Non-Government Organisations) and they can be divided into four main categories. Some are "Executive", and employ their own staff. The rest are "Advisory", or specialised legal tribunals of various sorts, or others such as Boards of Prison Visitors and Immigration removal Centres. This IfG chart shows how their numbers have declined over the years as Ministers have become increasingly uneasy about the size of this part of the public sector. (I haven't seen any figures but I very much doubt that NDPB staffing has decreased by anything like the same proportion, not least because a part of the reduction in numbers was achieved via merger rather than outright abolition, and it was easier to abolish smaller advisory bodies than the larger executive ones!) 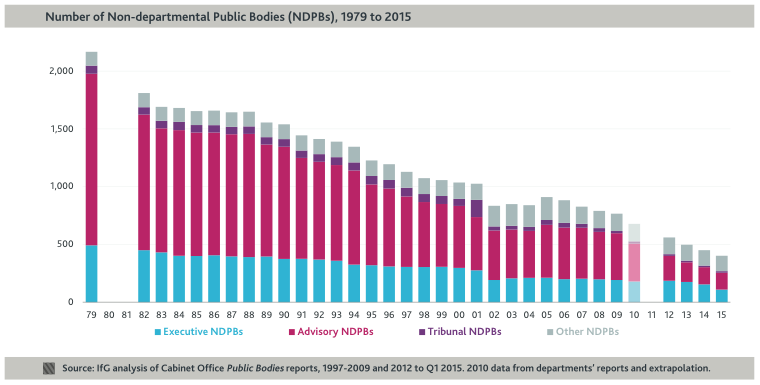 Some executive NDPBs are very large and/or powerful organisations such as NHS England*, Public Health England, the Environment Agency and the Financial Conduct Authority, as well as the special cases of ACAS and the HSE (whose employees are civil servants). Prominent Advisory NDPBs are the Boundary Commission and the Low Pay Commission.

(*NHS England is the Commissioning Board which oversees the wider National Health Service on behalf of the Department of Health.)

NDPBs are accountable to Parliament (and are headed by "Accounting Officers") and have a complex relationship with their sponsoring department. They are, by definition, not directly accountable to Ministers, And their employees (although often seconded from major departments) are not subject to the same constraints as their opposite numbers in their parent departments. For instance, Environment Agency officials will criticise polluting industries in terms which would not be used by officials from Ministerial Departments. However, NDPBs are set up to do jobs defined by, their budgets are allocated by, and their members are appointed by, their sponsoring departments. They are therefore hardly totally independent of those departments.

NDPBs are listed on the Cabinet Office website. See in particular Public Bodies 2014 (or later) and the Public Bodies Data Directory.

The National Health Service is in a category of its own as a huge central government organisation which has a large degree of independence but is otherwise constitutionally quite similar to NDPBs. It does not employ civil servants, other than on loan from e.g. the Dept of Health.

The Armed Forces are another major central government employer of public servants who are not civil servants.

Other public servants, but not civil servants, work for public corporations such as the BBC, Channel 4, the Bank of England, the communications regulator Ofcom, the Civil Aviation Authority, British Nuclear Fuels, and the British Waterways Board, who run the canals etc.

The Prudential Regulation Authority is a special case in that it is a limited company which exercises statutory powers and is treated for many purposes as part of government. The Authority is wholly owned by the Bank of England (itself a public corporation) and its employees are not civil servants.

Last, but not least, a great many public servants work for local authorities of various shapes and sizes, as well as in the police service.

Interestingly, universities are not classified as public bodies, at least for statistical purposes.

This is a collective description of those entities for which ministers have some responsibility, but which nevertheless have some freedom of action.  There are three types of ALB:

Each of these is described in more detail above.  Generally speaking those working for the first two bodies are civil servants.  Those who work for NDPBs are not.  But there are exceptions - again, see above.

There is more information in the Cabinet Office's 2016 Report on the Outcome of the Classification Review.

Government Ministers are appointed by the Monarch. They and their civil servants spend money voted by Parliament.

Most Non-Ministerial Government Departments and Executive NDPBs are created by primary legislation (Acts of Parliament) . Their activities are authorised and constrained by that legislation - and by their budgets annually approved by Parliament and their 'parent' department. But UK Sport, for instance, was created by Royal Charter.

Advisory NDPBs can be created informally as they do not have formal powers or spending authority.

And there were 22 Non-Ministerial Departments:

The Crown, in British Common Law, has certain rights and privileges which can be exercised only by the Crown. One such prerogative power is to decide the terms of service of its servants - that is civil servants. It is inherent in that power that the Crown can alter such terms of service without the agreement of its staff, albeit - these days - subject to judicial review.