This is one of four web pages that contain advice about the evidence gathering and consultation stages of the policy process.

If the subject of your consultation is particularly controversial, or if you are to meet a potentially hostile audience, or hostile media, you should remember the following basic rules:

And don't worry too much.  People will adjust.

Many consultations concern choices between outcomes that different factions find unattractive.  But you have to make a decision - or at least a recommendation, - despite the fact that you will upset quite a few people.  It can help if you bear in mind that that you are dealing with a real world situation, not a static laboratory experiment. 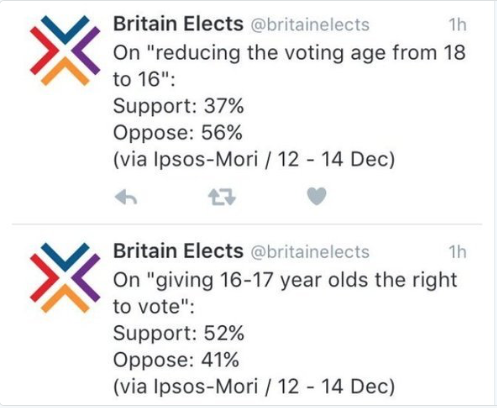 The public's response to questioning, for instance, depends very much upon the way that the question is put.  There is a nice 2016 example to the right.

And the public or business community will usually adjust their behaviour to cope with an unwelcome development, or may simply just get used to it. This is why environmental groups, for instance, are so keen to stop certain developments before they become established as precedents. Their response may seem to be out of proportion to the harm done by the proposed development but it might make a great deal of sense in the wider scheme of things. Do not therefore underestimate or patronise such lobby groups.

It is also often the case that widely divergent views are not so far apart as they seem. I was very struck by a 2012 report of two economists' supposedly very different attitudes to austerity. It turned out that they agreed on a great deal, and their policy recommendations weren't so far apart after all.

Indeed, once a policy decision has been implemented, it can be very difficult to tell whether it was correct, and it also becomes very difficult to get back to where you began. Who knows, for instance, whether it was right to give planning permission to certain large developments? But any attempt to knock them down would cause an uproar, from those who live in, work in or supply them, or from those who have simply grown fond of them (Battersea Power Station, for instance). I sometimes wonder what would have happened if our predecessors had known for certain that motor vehicles would end up causing one million deaths a year around the world. So don’t get too upset when a Minister takes an apparently illogical decision. The Great British Public will probably find a way of adjusting to the decision, if not actually circumventing it.