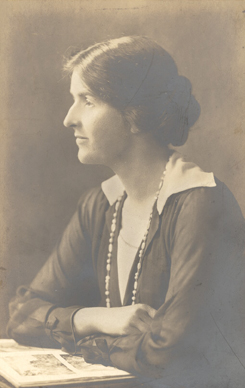 Born in Bedford in 1877, Bertha Phillpotts was another woman who found herself working for the Foreign Office during the First World War, having been recruited in a very irregular way.

She was home-schooled but won a scholarship to Girton College Cambridge where she studied Languages and then became an academic expert on Scandinavia – and Iceland in particular. She travelled to Iceland for the first time in 1903, and made several return trips during the following decade, when she pursued walking expeditions across the tundra with female colleagues

But she was much quieter, by nature, than colleagues such as Gertrude Bell and returned to academia as soon as she could after the war, becoming Principal of Westfield College for Women in 1919 and later taking a similar position back at Girton College.

She married late in life, in 1931, and died the following year.

There is further interesting information about Bertha Philpotts in Helen McCarthy’s excellent Women of the World – The Rise of the Female Diplomat.