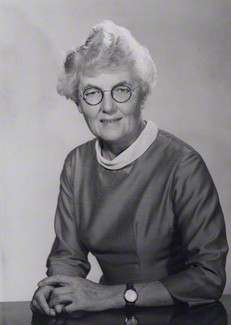 Enid Russell-Smith was born in Esher, Surrey on 3 March 1903. She was educated at Saint Felix School, Southwold, and Newnham College, Cambridge, graduating in 1925. She was one of the first of three women to enter the British civil service via competitive examination in 1925.

She joined the Ministry of Health and, during World War II, she helped evacuate children from Britain's major cities to the countryside to escape the Blitz. She later participated in the establishment of the UK's National Health Service, holding the titles of Principal Assistant Secretary, Under-Secretary and Deputy Secretary.

She was among the first British women to be awarded a black belt in judo. She began judo at age 34, and achieved her shodan (first black belt) grading in 1945. She ultimately achieved a 3-dan ranking through the London Budokwai. Throughout the 1940s and 1950s, she also edited Britain's first regular judo publication, the Budokwai Quarterly Bulletin.

Enid was awarded her DBE in 1953 and retired from the Civil Service in 1963, entering academia, being appointed as Principal of St Aidan's College at Durham University from 1963 to 1970. She published Modern Bureaucracy: The Home Civil Service - an accessible introduction to the UK Civil Service - in 1974. She continued as a part-time lecturer at Durham until 1986.

She died in July 1989, unmarried. Her papers were bequeathed to the Durham University Library.