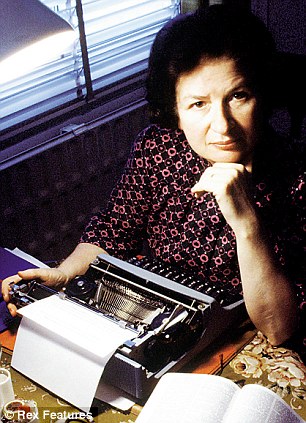 Crime Novelist P D James (then Mrs Phillis D White, later Baroness James of Holland Park) was a civil servant in the Home Office - working, of course, in the Police and Criminal Law Department - from 1968 to 1979. Her first novel was published in 1962.

She was once asked "why she carried on with that job for so long after becoming a successful novelist. 'I think it was because I was born in 1920 and grew up in the Depression when you got used to seeing notices saying: "No hands wanted". I remember my mother saying how lucky we were that my father was a civil servant and so his job was safe.' Her father was a rather cold and authoritarian Inland Revenue official. But life wasn't that safe: by her mid-teens her mother was in a mental hospital and Phyllis was caring for her two younger siblings. 'I grew up thinking it was important to have a safe job with a cheque at the end of every month.'"

P D James was born in 1920 in Walton Street, Oxford and educated at the British School in Ludlow and Cambridge High School for Girls. She left school when she was 16 because it was clear that her family could not afford for her to go to university. During the Second World War, her husband was a doctor in the Royal Army Medical Corps, but he suffered a mental breakdown and ended up in a psychiatric hospital. He died, possibly after committing suicide, in 1964. He hadn't been given a disability pension because it was claimed his mental illness had not been caused by war service. 'So I had him and two daughters to support, and did evening classes in hospital administration to get my qualifications. Then I was put in charge of psychiatric units [in the NHS] and I got two books out of that.' It was at this time that she saw an advertisement for the civil service and decided to take the examination. Even though she hadn't been to university, she came third in the country. 'I've still got the pre-printed letter which says: "Dear Sir" and "Sir" is crossed out and "Madam" has been written in by hand. It was so rare for women to take the exam.'