There used to be common structures and staff grades across the civil service, but these have mainly disappeared leaving some departments using numbers (Grade 7 etc.), some using pay bands (Band A etc.) and some using descriptors (Policy Assistant, Senior Policy Advisor etc.). But as there are no common titles used across Whitehall, some of the old titles live on, including in this website. The main ones, at Grade 7 and above, are shown in the following table:

Internally, when talking about senior staff across Whitehall, some now find it convenient to refer to refer to the “pay bands” (PBs) established by the Cabinet Office, where PB1 = the old Grade 5, PB2 = Grade 3 and PB3 = Grade 2. Comparisons between civil service grade and their equivalents in the armed services may be found here.

What do these senior people do? They help Ministers and other officials deliver Ministers’ objectives, both by giving advice to Ministers and by implementing Ministers’ decisions. They need to be able to work closely and effectively with Ministers, with other Whitehall civil servants, with the wider civil service, with the private and voluntary sectors and with pressure groups. They operate more like a club than a hierarchical organisation – and that is simultaneously their great strength and their great weakness – a subject to which I return later.

The key grade is Grade 7. Grade 7s are expected to know all there is to know about their policy area, and to know all the key players, pressure groups and so on. In a well run department, you will find that senior officials listen very carefully to their Grade 7s, and tend to operate in a way which supports their Grade 7s, rather than vice versa.

There are 4,000 plus in the Senior Civil Service (SCS), including many who work outside Whitehall, many specialists, and many who have been recruited direct from the private and voluntary sectors. SCS jobs vary hugely, but usually include one or more of the following:

The breadth of responsibilities increases with increasing grade, but it is seldom necessary for there to be a Grade 5 and a Grade 3 and a Grade 2 between the key Grade 7 and the Permanent Secretary/Head of Department. Most departments structure themselves so as to cut out one of these tiers (but not always the same one) in each management hierarchy.

It is worth noting that the more senior officials are not necessarily more powerful. They have to rely on others both for information and for delivery, and they are often heavily constrained by (small p) political factors, including the independence of each Secretary of State, and hence the independence of each departmental senior management team. Other constraints on senior officials include the need to avoid annoying Ministers, and the club-like nature of senior officialdom. The latter can be a good thing, in that it encourages senior officials to work collaboratively rather than just for their own Ministers. It also allows pay levels to be set relatively low, in return for lots of genuine job satisfaction. (You may like to read a more detailed note about Senior Civil Service pay here.) But the ‘clubiness’ of the Senior Civil Service can also lead to senior officials being over-tactful in their dealings with one another, which can delay change, leads to poor annual appraisals, and creates confused expectations.

Interviews with all six Cabinet Secretaries in post from 1979 to 2014 may be viewed here.  Transcripts are available here.

The Fast Stream is the main graduate development programme for the UK civil service, intended to provide many of the future leaders of the civil service. The term used to be applied only to the recruitment of 'generalists' - that is non-specialists: those who work most closely with Ministers in Whitehall departments. But it is now also the main route for the recruitment of specialists of various sorts, as listed in the following chart.

There are typically around 20,000 applications each year for around 1,000 vacancies. This chart shows the wide variation in success rates. 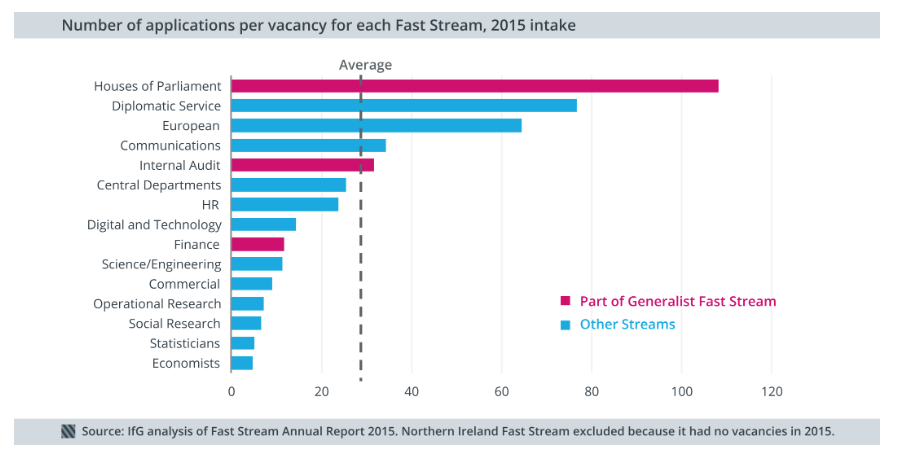 There is more detailed information on the type of candidates who are successful in the Fast Stream competitions on the Institute for Government website.